• Conducted all aspects of criminal trial prosecution from Voir Dire to closing arguments for murder, armed robbery, controlled substances, burglary, child sexual abuse, and other felony cases.
• Conducted jury trials as a solo prosecutor, a lead prosecutor, and second chair prosecutor
• Prepared cases, exhibits, and witnesses for trial
• Researched, then drafted motions and indictments for criminal cases
• Argued motions and conducted plea negotiations for criminal cases
• Controlled all forfeitures that came through the District Attorney’s Office
• Researched, then drafted motions and pleadings and all aspects of discovery for forfeiture cases
• Argued motions and conducted settlement negotiations for over one hundred civil forfeiture cases

• Established a farming operation of soybeans, rice, and cotton
• Farmed over 1000 acres of cotton

• Resident of Tupelo, Mississippi for over 18 years
• Father of three children shared with Janna Crowe, wife of 24 years
• Active member of Calvary Baptist Church
• Active member of Gideon’s International
• Involved with several charities which help underprivileged families in our community. 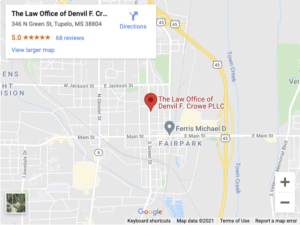